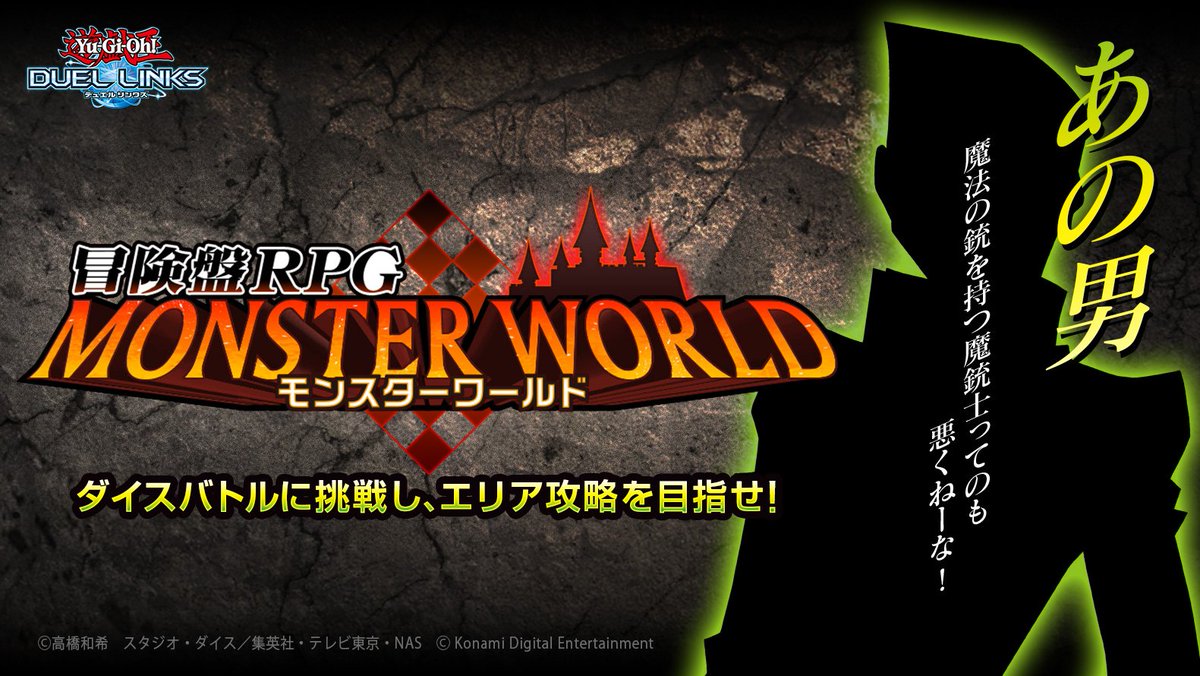 The gameplay of this event is a mix of Yu-Gi-Oh! and a dugeon crawl-type games. You will not be able to use your own decks, but instead pre-made decks you find in the dungeons.

Aside from Dueling there are also dice battles which are mostly luck based. Both Dice Battle and Dueling opponents progressively get more difficult as you ascend the dungeon!

For Duelists who have not yet unlocked Tristan Taylor this is your chance to get him!

Area 36-50 has been unlocked from 20 May 13:00 and You can complete the Area 45 to get the Exclusive Skill of Yami Bakura. This Skill will be sent to your Gift BOX if you haven't unlocked Yami Bakura yet but please be aware of the expiration date.

Area 21-35 has been unlocked from 18 May 13:00 and You can complete the Area 25 to unlock the Exclusive Character, Tristan Taylor. UR Jewel will be given instead to those who already own Tristan Taylor

Monster World is now more accessible! This time, you can Yami Bakura New Skill by completing Area 45 which will be added on 20 May 2019 13:00

1. Explore the area you are in

The Event overall is pretty straight forward: you find yourself on an RPG Board and you have to explore it

Both you and your opponent have a certain amount of HP; you both get to roll the dice and the outcome of each roll is the amount of damage you inflict to each other.
It’s an interesting concept, but it gets repetitive very quickly; you might as well tap on the screen without looking, the outcome won’t change.

3. Use your Event Deck to Duel against monsters

4. Complete the area to obtain a Reward!

Is this event worth playing in the first place?
If you are solely interested in obtaining Gems, well the event so far. It’s not that difficult to play and you can pretty much Auto-Duel anything up to a certain point if not the entire event.

If you were interested in Dark Master - Zorc, he can only be obtained from the Lottery so far, but the event will likely be updated in the next days and, fortunately enough, unlike in the Duel Island Event, the pool of cards for the Lottery is more restricted, so theoretically it should be easier to get what you want (even though having to rely on RNG to get multiple copies of any card, is still terrible).

Do we already have something similar in Duel Links?

Garlandolf, King of Destruction is another Ritual Monster with the ability of wiping the opponent’s side of the field, but his effect will trigger automatically instead of having to be activated manually, so it doesn’t if the opponent uses Floodgate Trap Hole or Paleozoic Canadia.

Garlandolf, King of Destruction can only destroy face-up monsters and only the ones whose DEF is lower than his own ATK, meaning he would not be able to destroy a Wiz, Sage Fur Hire, whereas Zorc doesn’t have either of these limitations.

Which one is better? Zorc has slightly more ATK and a more generic destruction effect, but he is not really much of an upgrade compared to Garlondolf.

The event looks nice, just like previous ones already did, but it fails in being enjoyable to play and the rewards are not impactful; however it’s still better than the Duel Island Event and it even gives you the chance to try out U.A. and Mermails before their official release.

The Infinity Map is provided by dgamelinks.blogspot

Anonymous 11days ago
Bring back this event KONAMI!
Reply
See all 5 comments..
<< Anonymous

This event required a lot of effort and creativity. That’s why we won’t do it again.

Thank you for playing Duel Links

Also you do know that's not a real konami right,lma0

Anonymous 11days ago
This event is the best in Duel Links I wish Master Duel can add it cmon Konami!
Reply

#BringBackRPG
I know it's not likely to come back, but I truthfully love this event way more than the D.D. Tower and Duelist Chronicles. Because, come on, they're all basically auto-grinders anyway - at least give me the satisfaction and progression to use progressively stronger theme decks I wouldn't otherwise be excited about. The dice battles are silly, but unoffensive and surprisingly satisfying. It was always an event that I checked multiple times a day to deplete my stamina as opposed to just grinding the same fights ad-nauseam.
All people care about is better rewards and gems, so just make it worth people's time. Easy-peasy. But they like to keep the theming, which is why we'll never see Pegasus again because Toons are so underwhelming competitively...
Reply
<< Anonymous(#BringBackRPG)

Anonymous Reply
Same, I love this event, wish they can make a similar event available again one day.

Anonymous Reply
if you don't like it then just don't play, as simple as that
<< Anonymous

Anonymous Reply
Sorry bud, i am someone else. You are just 🔥ed as it gets to you. Plus who is the heck with a sane mind tell some sort of irrationality to stranger they don't know and demand them to whether to play or not. Get real dude, you are becoming the joke of the day.
<< Anonymous

Zonk Reply
I agree that this event is not interesting and boring. Don't need to be explained in detail, each player has his own opinion

Unlucky
Missed only one Ghost ship, my boy!

10101010101010101010
This event reminds me a lot of the main series, where Bakura attempted to become to ultimate, most supreme, omnipotent, all-mighty, one and only God and tried to enslave all human beings in a world of death, blood sacrifice and suffering.
He called it "the ultimate Yami no Game" or the "Ultimate RPG!".
https://youtu.be/02Aa7Zt-1po

Anonymous Reply
Lmao didn't yami yugi 🔥 someone and make them go crazy because they stole a watch.
<< Anonymous

Anonymous Reply
There is one guy who is really crazy here, I can tell... he's always posting 80's music but at least the image of the guy with the guitar looks funny enough
<< Anonymous

Anonymous Reply
Yeah, some dude is freaking paranoid. His mind must have received some kind of shock.
<< Anonymous

Anonymous Reply
What an awesome scene

Anonymous
By far my least favorite event. Boring, tedious, and lackluster rewards. I hope this is the last iteration of this event and that they put Tristan at the gate already.
Reply
See all 9 comments..
<< Anonymous(Konekmemek)

Anonymous Reply
Sure the event is “less useful” than some of the others, but I appreciate they try something unique rather than just plain boring duel-a-thons or bingo sheets
<< Anonymous

Anonymous Reply
The idea is unique, don't get me wrong. But the execution leaves a lot to be desired.
<< Anonymous

Anonymous Reply
For what it is, I feel like the event was pretty fair. Sure, it's not a shining beacon among events, but it was a pretty fair RPG. You earned better decks as you progressed, relied on skill rather than copy-pasta decks, and there was even the occasional fun interaction between the character (Tristan) and the DM. Best I can say is they should work to improve the event, rather than just ditching it.

Anonymous
Dice battle is 🔥, just pure luck. Often die at least once because the enemy has large HP, wasting stamina and time just for this 🔥 battle
Reply
<< Anonymous

Anonymous Reply
You get plenty of Dice+1, use them to get bigger chance to roll a double attack.
<< Anonymous

Anonymous Reply
Were you really expecting the dice battles to... NOT be based on luck? Do you not realize that most games that use any sort of dice are often reliant on luck in at least some aspect? Plus, the enemies may have more health, but you're more likely to roll doubles, and you could always grind Area Infinity for more levels, and thus more health, so...

Anonymous Reply
The coins may be random, but by grinding this event you are accumulating EX Jewels, and they can be used at the Trader EX to get 1 guaranteed copy of Ghost Ship. Alongside the one you get from an area reward that makes it 2 guaranteed ships.
<< Anonymous

Anonymous
They purposely made it so that you will die at least once in every other dice battle, therefore wasting your stamina and time.
Reply
<< Anonymous

I've only lost a duel once in the event, due to using the wrong deck (NEVER use the Counter Fairy deck, it's useless in this kind of event)
<< Anonymous

Anonymous Reply
Yeah, reactive deck like Counter Fairy doesn't really work here when your opponent most of the time just summon monsters into the field.
<< Anonymous

Anonymous Reply
Glad I'm not the only one that noticed this.

Anonymous
This event is a bit boring. I just play this event for autoduels (even the dice wars). Not feeling this much.
Reply
next
tweet share share

A Soldier from the Fusion Dimension: Sora Perse Unlock Event

A Soldier from the Fusion Dimension: Sora Perse Unlock Event

Sora Perse Unlock Event | How to Farm Sora Lvl40 & Lvl30 133
You only wish him to be ga y because you want to suck his c0ck
Maximillion Pegasus 353
Use Power of the Guardians to add Spell Counters
Kiteroid | Decks and Tips 290
I'm glad that you guys pick Flip Turner over Kite. Men of culture.
PvP Feature: Legacy Duel (Beta) 55
buy them
> Go to the latest comments

King of the Swamp | Deck and Rulings

Why can’t I activate Spell effects on first turn?
Why the Azure-Eyes White Dragon sometimes is not being summoned?
can UR cards be obtained in LD level 10 duels?
How do I unlock base Yugi Moto
Why can't I activate card effects on the first turn??
If I uninstall/transfer my duel links account, do I keep my tickets when I re-download my save?
How many different Utopia cards are there in duel links
What is the DL icon in the cards?
> See All

Echoes of Mana
Clash Mini
WOTV - WAR OF THE VISIONS